In the top 10 list released by Yahoo Sports on Monday, Kang Jung-ho of the Pittsburgh Pirates ranked third, while Lee Dae-ho of the Seattle Mariners and Oh Seung-hwan of the St. Louis Cardinals took sixth and seventh place, respectively. 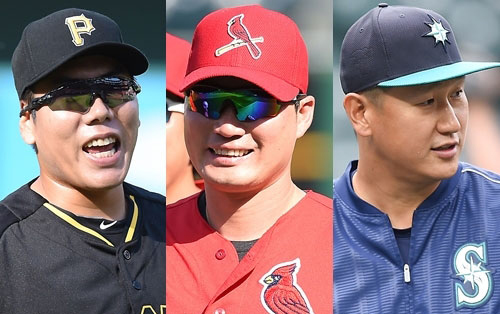 "The Pittsburgh Pirates saw more in [Kang] than others, and now they've got him for $2.5 million this season and just $11.25 million more over the next three years," the sports news website said. "The closest thing to Kang's deal is the spectacular bargain Milwaukee got on Jonathan Lucroy at $12.5 million over five years."

"Lee wasn't even guaranteed a spot with the Seattle Mariners when he jumped from [Korea] to the major leagues this offseason," Yahoo Sports said. But he "is hammering lefties and righties alike... and is one of the best bargains in baseball this year, even if the Mariners have given him a $250,000 roster bonus, owe him another soon and likely will owe him another $1 million or so in plate appearance incentives."

As for Oh, Yahoo Sports said, "The Cardinals are paying Oh only $2.5 million, and he deserves an All-Star appearance." It also added "perhaps teams will get over the idea that players from [Korea] aren't worthy of major league-quality salaries