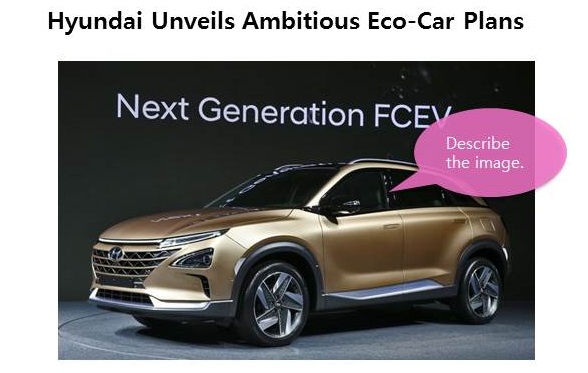 Hyundai unveiled plans to roll out 31 eco-friendly models by 2020, including hybrids, electric and hydrogen-powered cars.
The goal is to bolster the automaker's current lineup of 14 eco-friendly cars to become the world's No. 2 in the field.
The carmaker said it will unveil an electric version of the Kona small SUV in the first half of next year that is capable of running up to 390 km on a single charge.
Hyundai also wants to develop an electric car that can run up to 500 km on a single charge and release an electric version of the Genesis luxury sedan in March next year.
It also offered a glimpse of a hydrogen-powered SUV it plans to release in March next year.
The midsize SUV will be able to travel 580 km on a filling and have a price tag of some W79 million (US$1=W1,138).
unveiled: …의 베일을 벗기다. 출시하다. hydrogen : 수소 automaker: 자동차 제조업자  capable: 가능한 release: 출시하다. 풀어놓다 glimpse: 흘끗 봄midsize: 중형의, 중형차
million: 100만

Our mission statement is simple: "Making you smarter every day."-뉴스톡